The title of Charlotte Dance Festival‘s professional concert, Dance Charlotte, is a little misleading, as only one choreographer in each of the two shows presented last Saturday lives in Charlotte. I attended the 8:00pm performance at the Duke Energy Theater and got a taste of some of the dance being made not just in the Queen City, but all around the country. A few pieces were sweet and satisfying; others could have used a palette cleanser.

Dance Charlotte featured three solos, the first by Sarah Todd Emery, a long time Charlotte dancer and director who relocated last year to Atlantic Beach, FL and then Atlanta, GA. Most will remember Emery’s impeccable technique and precision from her work with Moving Poets Charlotte; “The Moment that Is”, presented under her new company name Watershed Dance Theatre, was no exception. Clad in fitted a black top and pants complete with black pointe shoes and paint on one side of her face, Emery moved spritely with her usual cleanliness and direct intention. Two white squares laid in tape on both sides of the stage juxtaposed the darkness of her costume, but complimented her angular dancing. Over the course of the piece she messed up one square and bundled it up, leaving the other one intact, suggesting the power choice or (according to the program notes) “Regret… a decoy of the mind driven by ego.” I certainly don’t regret catching Emery’s homecoming performance and look forward to what her new Hotlanta residence will push her to whip up next. 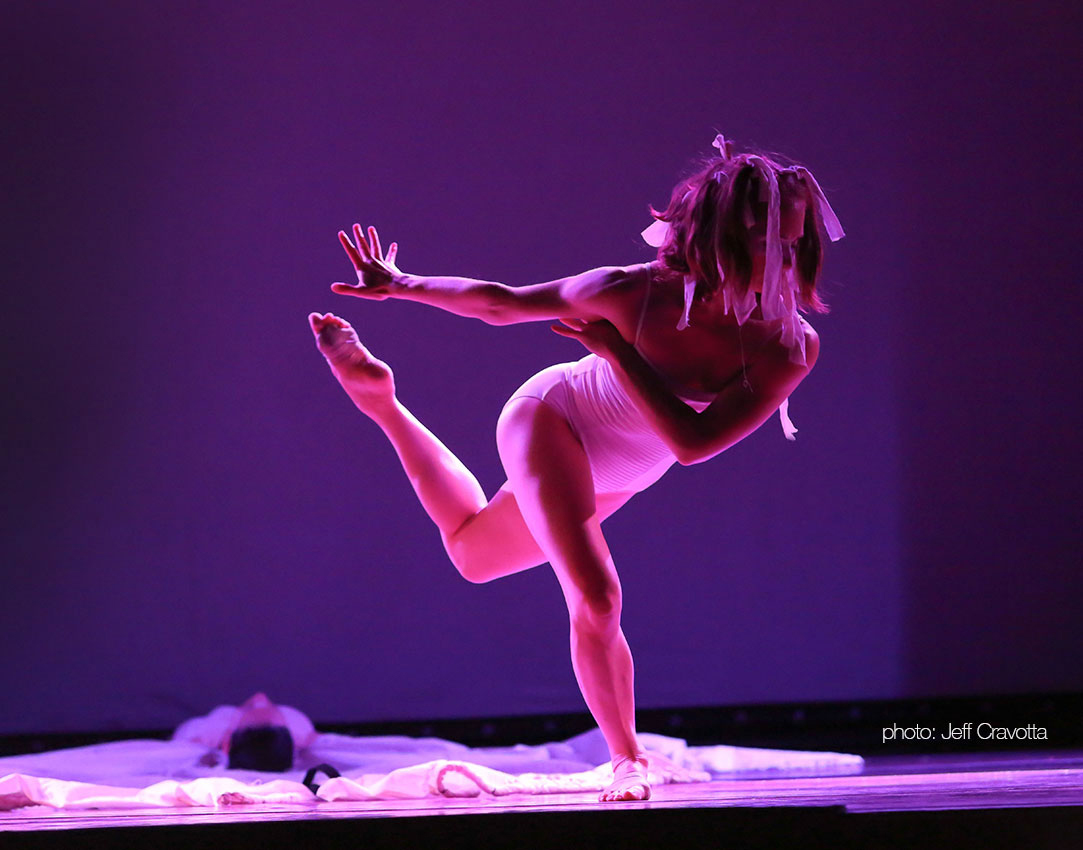 Marlene Skog, Assistant Professor a the University of Wisconsin-Madison, presented “Passages”, a solo danced by Mary Patterson, also dressed in all black. Her costume and movement were more fluid than Emery’s, but technique not as sharp. Patterson emoted beautifully, and I was refreshed to see a dancer convincingly acknowledge the audience in a concert of contemporary work, where the stoic, deadpan face is all the rage. But watching her hop through double pirouettes and do some okay barrel leaps kept me from fully believing her and joining Skog and Patterson on their passage.

Tamara Williams, the lone 704 resident on the bill, performed an African Diaspora solo to the live percussion and vocal accompaniment of Luciano Xavier. Williams, a new Assistant Professor of Dance at UNC Charlotte, danced “I RUN m.o.l.e.” with light in her steps and flirt in her eyes. Seeing a genuine smile on stage (I know, crazy!) warmed my heart, and Xavier’s music perfectly matched Williams’ energy (as it should. They are married.) I felt a little uneasy watching her exhaust herself, and what appeared to be an unfortunate lighting snafu mentally took me out of the dance for a second. Still, by the coda I wanted to clap and yip her along, but the subdued audience in Spirit Square’s black box theater didn’t feel like the right company. I’m glad Elsie Mufuka disagreed and raised her voice in support of Williams and Xavier’s effervescent performance. 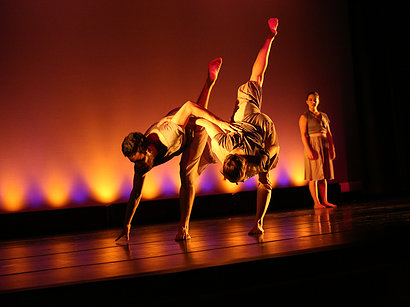 The strongest course of the night was “Gifts for the Void” by caitlin+dancers of New York City. Marion Helfenstein, Jean-Pierre Lemire, and Jenna Purcell effortlessly weaved in and out of, over and under, and through each other in Caitlin Dutton’s lovely work set to the music of contemporary dance favorite Michael Wall. The movers partnered with ease and guts, catching, falling, and tossing in ways only found at the most delicious contact improvisation jams. Separately too, they all danced with equal parts grace and risk, and several times I vocalized under my breath and tilted my head hard to the left, what I do when dance really touches me, or I enviously want to get up and join. Sure, modern-dance-faces abounded, it got a little long, and I have mixed feelings about men in gaucho pants, but even as the lights eventually faded on the still weaving trio (after another weird lighting mishap), I could have easily taken a break and come back for seconds from caitlin+dancers.

The final piece of the night was “Encore” by Daniel Gwirtzman, also of NYC. Selected dancers of varying age, experience, and levels made up this year’s Charlotte Dance Festival Repertory Ensemble and tried valiantly to embody the “high spirits and skill” for which Gwirtzman has been praised (The New Yorker). Perhaps better in theory, or on a group of performers equally trained in technical dance and musical theatre, “Encore” presented the old behind-the-scenes / dancers-warming-up / rehearsal-before-the-show schtick. CDF director and founder Caroline Calouche held a clipboard and yelled notes to the dancers and booth, who all obliged. They pretended to diligently practice and edit sections of a big performance until (oh, no!) time finally ran out and the curtain had to go up. The dancers magically transformed from a hodge podge of warm-ups to a hodge podge of shiny costumes, which would have been more convincing had we not seen the sequins peeking out of their track jackets. They smiled, kicked and turned; they shook jazz hands and did semblances of swing dance; they cheered each other on in a semi-circle as a few took the center to attempt pirouettes, leaps, and sass. The nine dancers’ commendable and at times cute stab at humor, ensemble work, and a worthy finale mostly fell flat and tasteless.

Nonetheless, the crowd enthusiastically applauded at the end, but I can’t help but wonder if the hoots and hollers were more from relief THAT it ended, as much for the audience as the uncomfortable dancers themselves. What was meant to be a refreshing dessert tasted more like that episode of Friends when Rachel makes a trifle and mistakenly puts a layer of ground beef in the middle. What started with a good idea should have been promptly remedied, revised, or scrapped the moment it started looking and feeling not… quite… right.

In all, the 11th annual Dance Charlotte was actually a pretty accurate representation of dance in Charlotte; some sweet, some savory, some sour, but all with heart. The CDF has been pumping along for over a decade, at times stronger than others. I hope that this year’s performance is simply a lull and finer, more consistent, quality in choreography and dancing is yet to return. Better attendance would be nice too. Perhaps if Charlotte’s own dance festival offered more from the widely loved, homegrown variety of movers and makers, the lines to get in (on stage and in house) would once again be out the door.